Karnataka: Slow Travel on a Cycle

Asked what his favourite mode of transport was, the writer Ruskin Bond once said, “Road roller.” It was so slow, he said, that it allowed him to take in his surround­ings as fully as possible.

Not quite as slow, but still not nearly as fast as a car or motorcycle, is the bicycle. And the day’s plan is to ride one in the valley of Nandi Hills, some 60 km north of Bengaluru. I’ve entrusted myself to the capable hands of Unventured (unventured.com), a travel company that offers a range of cycling tours, from a 9-day Manali to Leh expedition to the beginner-friendly day trip to Nandi Hills.

Guru, one of the founders of Unven­tured, picks me up early in the morn­ing at a junction in Bengaluru that was until recently a jutka stand. With that particular mode of slow transport now dying, the place has now been made a parking lot–warm animals replaced by cooling engines. 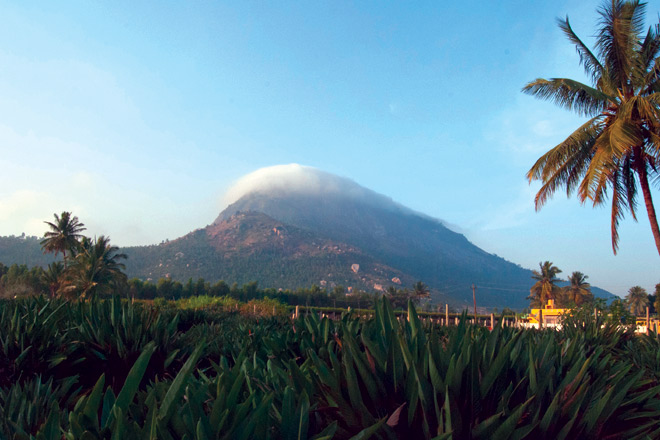 Guru’s car is conspicuous for having two bicycles fastened to its boot. Soon we’re racing down the Bengaluru -Hyder­abad highway. On either side, the pre-dawn fog is settling milkily around squat buildings and the trunks of palm trees. Then, the sun emerges to clarify the day. Along the way, we regularly streak past assiduous bicyclists, all blinking tail-lights and pumping legs, out for a morning ride on the weekend. Guru says that Benga­luru has become the cycling hub of India. Perhaps the phenomenon arises from the city also being a tech hub, with a certain fraction of its population flying–at great speed–to and from, say, San Francisco?

It is true that cycling is increasingly visible around the city–packs of cyclists on the highway, commuters wearing backpacks at traffic signals. To be clear, it is the visible cyclists who have become more visible. Others have always been cycling here, but the new lot does so out of choice–for exercise, for adventure, for the planet. This comes with flashing tail-lights, gleaming reflectors, bright clothes, sleek water-bottles, cling-on Klingon helmets, bikes that sometimes cost as much as a low-end motor vehicle. Clearly, the postman and the programmer roll very differently.

The hump of the hills–one reason it might be called Nandi–comes into view; we soon reach Nandi village and halt at Silver Oak Farm(silveroakfarm.com) for breakfast. It is an organic farm with rooms, a verandah with a view and a fine kitchen. Guru unloads the bikes, gives brief instructions for the ride, and we’re off downhill on a juddering cobbled road. 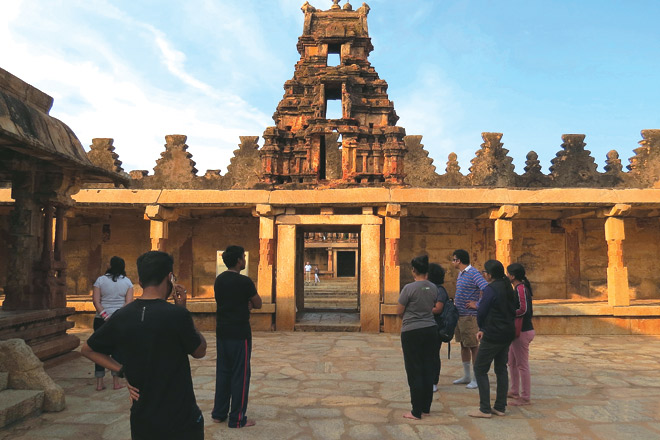 Most visitors to Nandi Hills–usu­ally, picknickers from Bengaluru–head straight for the top, which consists of a fort built by Tipu Sultan, a couple of temples, a pond, a colonial-era mansion now converted into a hotel, a garden, and a house where Gandhi once spent a month and a half in 1936. But Unventured’s ‘Tre­aures of Nandi’ trail ignores the top and instead does a 27km ride around the hills, with stops that give a sense of the valley’s history and culture.

This area’s history certainly doesn’t lack in drama or consequence. Right at the beginning of the trail is the village of Sultanpet, where Colonel Wellesley’s troops were scattered by Tipu’s rockets. Tipu, and his father Haider Ali, were the first to use metal-cased rockets in battle, and these caused the Brits considerable trouble in the Anglo-Mysore wars. Tipu was ultimately killed, but the Mysore rocket lived on and was modified into the Congreve rocket in the early nineteenth century. The missile became popular in Europe, and a cause of grief to Napo­leon’s army, who, in that circular way history has, used to be an ally of Tipu. To complete another circle, our Sultanpet Wellesley ended up as the Duke of Wel­lington, and was responsible for Napo­leon meeting his Waterloo.

At Sultanpet, we drop into a home, one room of which is a silk-spinning unit. Silk was one of Tipu’s obsessions. When he was not fighting the Brits, he sent delega­tions to Bengal and China to bring back mulberry and silk-worms, and introduced sericulture in these parts. That legacy still lives on in the form of Mysore silk. There’s also a century-old railway station built by the British, which still has the occasional train passing through. 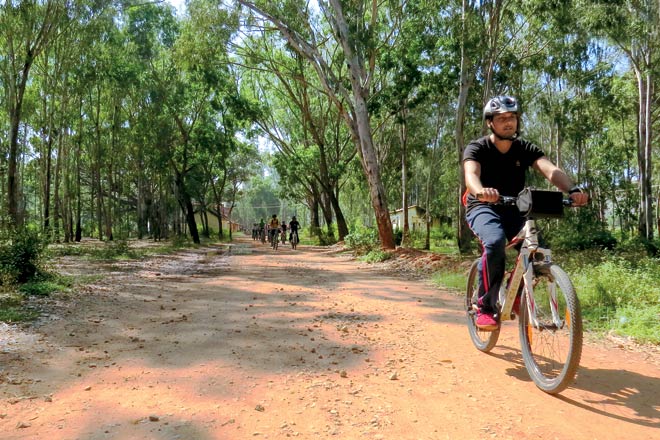 We’re riding clockwise around the hills, so they’re always to the right, gently changing profile. To the other side are magnificent boulders, fields, grape vines, eucalyptus trees. By any objective standard the landscape around me is very pretty. But the manner in which I’m tra­versing it changes how I perceive it.

Here’s the thing about riding a bicycle: it needs work to cover any distance, and this changes the relationship between the rider and the surroundings. Since I huff uphill and coast breezily down; since my pace, my choice of where to take a break are determined as much by my own bodi­ly needs–exhaustion, thirst–as by the terrain or by something in it that catches my eye, I feel as if I’m part of the land­scape, and not an observer on the outside. I’m spending energy on moving myself along. This means I have less to feed to that frisky mind, and so those habits of slotting, judging, classifying, invoking similarities and differences, are relatively subdued, and this makes me more quietly receptive. All this taken together feels very different from the oh-look-how-lovely experience that passive transit through a place brings. This is a more sober, a deeper feeling of well-being. 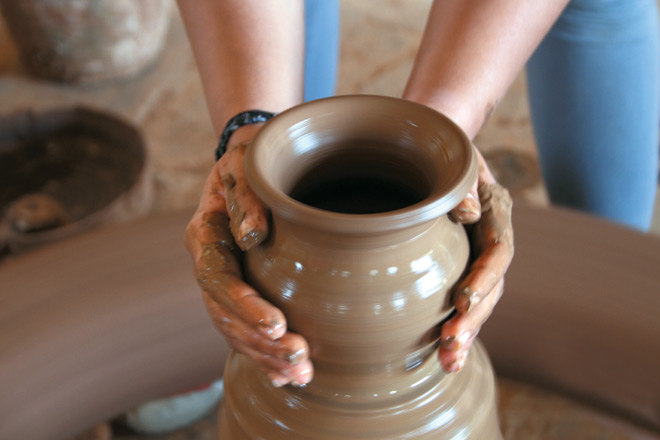 It’s Sankranti and Nandi village has tall stalks of wine-red sugarcane being sold in the main square; there’s colourful rangoli outside homes. The natural pace of the cycle is just right to take all this in. And if I feel like looking at something again, I can just turn around and trace a languid loop. 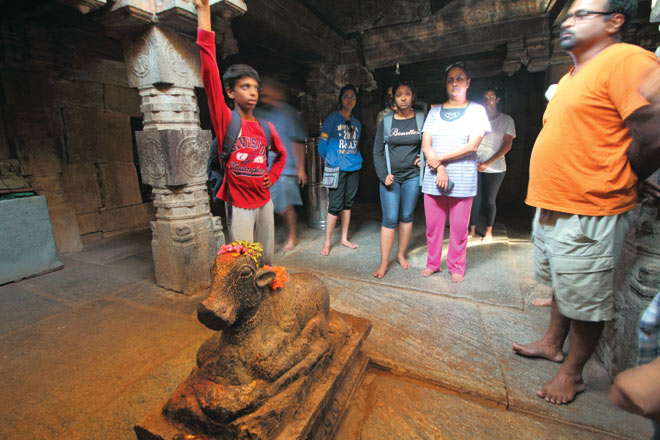 At the Bhoga Nandishwara temple, the idols of Shiva and Parvati are first wedded and then carried out on a palanquin. The original shrine dates back to the ninth century, when it was constructed by a Bana queen. Now it’s a sprawling complex of ornate stone (and some masonry), with shrines, pillars, temple tanks and inscrip­tions added, sometimes crammed in, by subsequent rulers. These rulers ranged from the Ganga, Chola, Hoysala, Vijay­anagara dynasties, spanning a dazzling range of styles and material. There’s so much human ingenuity on display here. 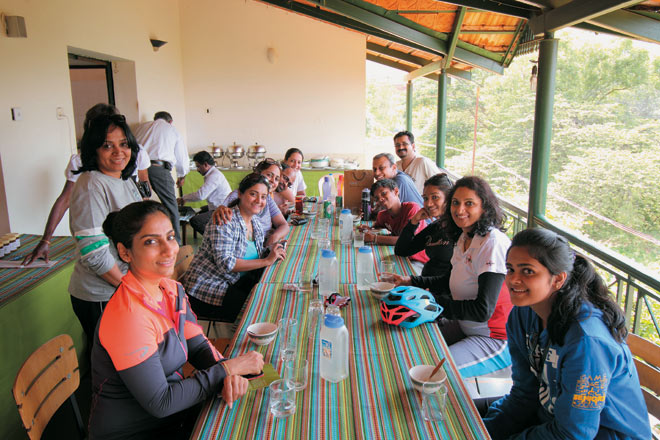 So much, that I have to wonder as we head back to Silver Oak Farm for lunch–if humans were capable of all this so long ago, then why was something as appar­ently simple as the bicycle invented so late, only in the 19th century? Pyramids, chariots, telescopes, sextants, watches, steam locomotives–they all came well before the bicycle. Perhaps no one could imagine a person on two wheels? It is, after all, a small miracle. To ride a bicycle you must move before you can balance and balance before you move. And yet, somehow, we manage it.

A bicycle lets us travel much farther than we could on foot. And it does so while allowing us the grace and dignity of moving under our own power. It also, like all physical exertion, gives us an appetite and sharpens the tastebuds. I’ve never had a cooler, sweeter, tender coconut than the one I ate midway through the trail. There’s never been a tastier lunch that the one waiting for us at the end of the ride.

I have only once had the opportunity to trundle along on a road roller. My dominant memory is of a ride so bumpy and noisy as to immediately instill in me a deep sense of gratitude for the tyres and shock absorbers present in other vehicles. It’s a fine idea to move through the world slowly, but it’s probably better to do it on a bicycle.

Holidays in the hills Inspire Me
6 farmstays in Maharashtra to experience rural living Inspire Me
11 heritage hotels and homestays for a 'historic' holiday

Going back in time